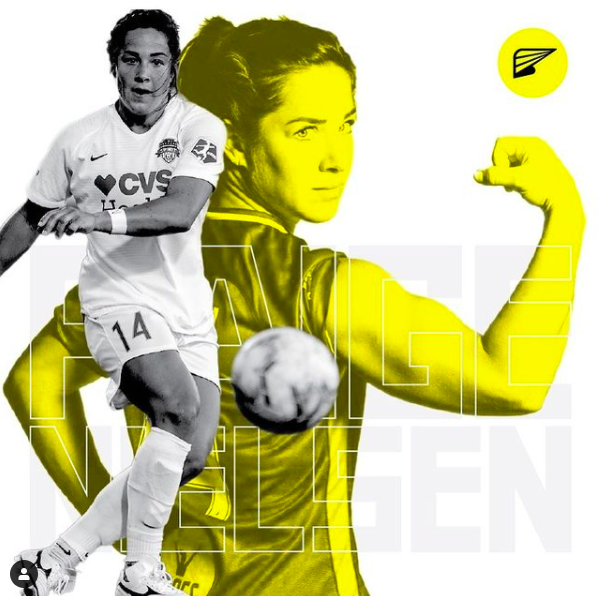 Paige’s soccer career started at a young age when she would play with her friends and older brother. Her natural talent and passion for the game led Paige to win awards starting in high school, where she was named a Nebraska Gatorade Player of the year nominee in both 2011 and 2012.

A Nebraska native, Paige played at the collegiate level at the University of North Carolina. Her first year, the team won the NCAA Division 1 Women’s Soccer Championship. She concluded her collegiate career with 13 goals and 7 assists playing as both a defender and forward her senior year.

As she transitioned to professional soccer following the 2016 draft, Paige signed with the Seattle Reign. Making the jump from college to professional soccer was difficult for Paige. “The soccer IQ jump is massive… I was forced to play abroad for three years to completely understand the elements of the pro game.” Paige recalls. From 2016-2019, Paige played with the Western Sydney Wanderers (2016-2017), Suwom UDC (2017-2018), and Canberra United (2018). After getting the experience overseas she deemed necessary, Paige signed with the Washington Spirit in 2019.

“I love how soccer connects the world we live in,” Paige said when asked why she loves the game. “I have friends all over the world now because of soccer.” This, and her constant goal setting is what has kept her motivated in the sport. One of her biggest goals is to make the US Women’s National Team.

Paige has faced many challenges as she reaches for her goals, one of the more influential being the passing of her mother when Paige was young. “[She] taught us to take every opportunity that came our way and to reach for the highest goals possible.” Paige has used this hardship and many others as fuel to drive her to success.

When asked why she chose Felkrem as her agency, Paige responded, “It was honestly an easy question for me. I have these feelings and they have gotten me far in life…I instantly connected with Cisco, and his passion for the game and his players became apparent instantly…I believe Felkrem has the tools and infrastructure to not only help me on the field but also as a brand.”

Welcome to the Felkrem Family, Paige!

About Felkrem: Felkrem is a full-service talent management and sports marketing consulting agency, assisting brands, properties, and athletes as they pivot toward success.